Donation and kick off

The 29th of July we personally delivered a 2000€ check to Andrea Vigna di UILDM, from the Omegna section and the 24th of July we handed 1825€ to Don Fabrizio Fè in support of the volunteer Group of the church of Trobaso, as a contribution towards travelling expenses in regard of the trip to Gornja. Further 2500€ have reached the foundation “Il Giardino delle Rose Blu” in Gornja. We will send out 600 postcards for our donors in 2016 from Gornja Bistra – Croatia.

Our yearly trip will take place between 9th – 22nd August, we will hire a camper and will be riding his bike for the most part of the journey Verbania – Gornja for aobut 800km while I will be riding my bike for smaller segments, according to my body’s response following the incident of the 3rd July in which I broke my pelvis. Tiziano and I will be taking turns to drive the camper. Don Ermanno will welcome us in Gornja and honor us by engraving “mi&ti” and our names on the walls of his structure (which is being completed as we speak), and will eventually host volunteer groups. Combining this year and last year’s donation, mi&ti contributed with 4500€. 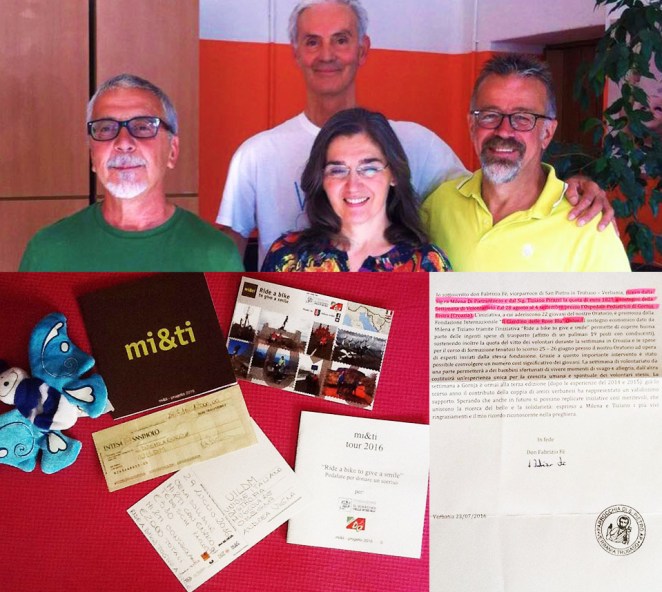